At the request of Mayor Smalling, any citizen wishing to fill the current vacant position until the November 2022 election should submit a letter of interest to City Hall.

The current Council will vote at this Thursday (11/18) night’s meeting the timeline of selection of person to fill the vacant seat. 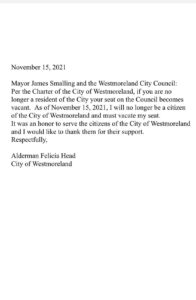